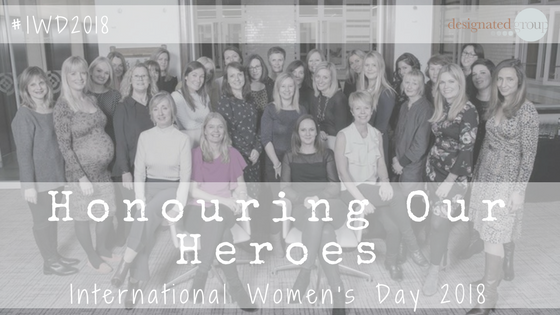 In celebration of International Women’s Day today, we wanted to pay tribute to the phenomenal women who inspire us here at The Designated Group.

Read on for some fantastic, and moving, personal stories!

“This year International Women’s Day feels like more of a celebration than ever before as more women feel comfortable to show pride in who they are and the roles they play. We asked our team to share their stories about women that inspire them and I was surprised but delighted to see how many women hold their own mother as their hero. This reminds us all what important role models we are within our families as well as in business.”

“My hero?  My mum, Ann. She left school when she was 15, it was what you did ‘back in the day’, ‘up north’, no qualifications, no prospects. She made a family with my Dad (I’m their favourite child, of course).  She had cleaning and factory jobs, we scraped by. In her early 30’s she began to suffer with anxiety and depression, I think probably she’d always suffered with self-esteem issues, but they really hit her then. She got help. In her mid-30’s she applied for an ‘office job’, never thinking she’d get it.  BUT SHE DID. Fast forward 25 years, she has two foundations degrees (in NVQ form) plus a whack of other qualifications.  She clawed her way up the MOD Civil Servant ladder, and effectively gave everyone in my family the foresight to ‘never just accept your lot in life’. She’s retired now and spends her time generally spreading goodness, in the form of voluntary work.”

“I came across Anna Whitehouse (aka Mother Pukka) in 2016 and she quickly become my female business hero with her “flex appeal” and #WorkThatWorks campaigns. Mother Pukka’s slogan is “Parenting the sh*t out of life” which resonates with me! If I’m ever having a bad day with the constant juggle of life and being a working mum a quick read of her blog, or her Insta-stories, makes me LOL and realise I’m really not alone!”

“I have to say I’m my own hero! I became a single mum just as my daughter turned 2 years old. This was before the days of virtual working so I used to spend 4 hours a day commuting into London, and paying a fortune in childcare, to keep a roof over our heads. I hardly spent any quality time with my daughter and had health issues too. Fast forward to today, eleven years on, and although it’s been a struggle I can look back and be proud that I have never given up. I used to be so hard on myself: Am I a good parent? Am I making the right choices? Now I can see that the answer is YES! I am doing a job that I love (and I am good at!), I am a great mum, and quite frankly I am amazing!!”

“My mum. She has picked herself up after my sister died of breast cancer and has since dedicated her life to raising awareness of the disease and fundraising for Breast Cancer Now. She has been the face of the charity on many occasions – appearing in two M&S campaigns, campaigning in Parliament and in Washington DC, featuring in radio shows, press and on television… she’s even had tea in the Queen’s garden. She has kept going when I know at times she wanted to curl up in a ball and hide away. Not being a parent myself, I can’t fully appreciate what it must be like to lose a child (although losing a sister is horrendous in itself) so I take my hat off to her. Single-handedly my mum has raised almost £300k to date, and she won’t stop. She is especially inspirational as she’s now got early onset Alzheimer’s and yet faces each day with grit and determination.”

“I have two heroes. Firstly, my mum, who raised my brother and I alone. She left her home in Dubai to come to the UK for my brother’s education. She has taught me to be independent and to never rely on anyone for happiness or money. Everyone who knows her thinks of her as a Mother Theresa… she’s been a nurse, a carer and a constant friend who’s taken in waifs and strays, and never turns away someone in need – one Christmas we shared our presents with a teenager who had been kicked out of her home and mum had taken in. Everything she does is for everyone else and never for herself. She can’t walk through her home town without being hugged by at least one person!

“Secondly, Malala Yousafzai, the youngest ever Nobel Prize laureate and a powerful activist for girls’ education. At just 15 years old she was targeted and shot by the Taliban for the work she had been doing in Pakistan, and for daring to go to school. She continues to advocate on the world stage for the rights of girls and women. She’s amazing, and brave, and everything that young girls should be inspired by. There’s so much more to say about her… please read her story!”

“I work in marketing so naturally I admire someone who does it well! Sara Tasker (Me and Orla) inspires me every day. She achieves so much and helps so many people make a living being creative.”

“Since I read her first biographical novel I Know Why the Caged Bird Sings as a teenager, I have idolised Dr Maya Angelou. She is a symbol of unbelievable strength, courage and dignity in the face of poverty, racism and abuse and her faith in the human spirit despite all she had to overcome. She survived terrible circumstances in America’s Deep South, raised a son, educated herself, worked alongside Martin Luther King Jr and Malcolm X during the Civil Rights movement, performed on stage, and was a teacher, Poet Laureate for President Clinton and a prolific writer of some of the most inspirational, moving and beautiful poetry, essays and novels. If you haven’t seen her recite her famous Still I Rise and Phenomenal Woman, you must do! R.I.P Maya.”

If you think you and your business could benefit from a highly skilled and experienced Designated PA, or any one of Designated Group’s services, do get in touch for an informal discussion: